Why Are You Burning Out?

Want to know why you’re constantly burning out? It’s pretty simple really. After studying and using DISC for over the last 10 years of my career, I’ve noticed this pretty impressive pattern starting to develop.

If you’re not familiar with DISC, you can read about it here.

For those that are familiar with DISC, you will be aware that if you’ve undertaken a proper assessment you have what’s called a “Natural Style” profile and a “Perceived Need to Adjust” profile (as pictured below). 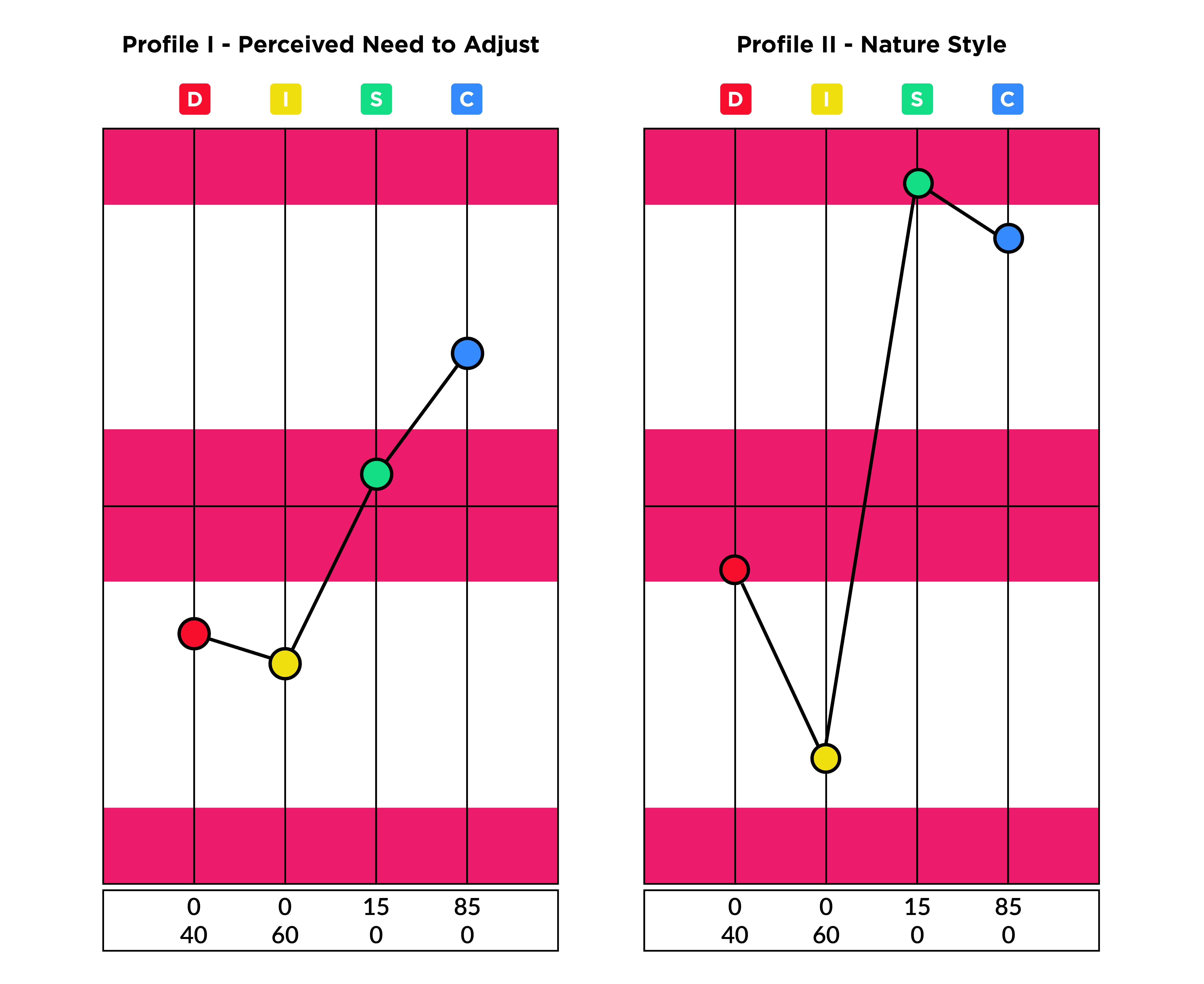 So, what are these 2 profiles able to tell us about this individual above.

You can see in Profile II, which is their Natural Profile, the individual has an extremely High S and High C. This persons profile would be classified as a SC given both the S an C are above the middle section of the graph.

Now, compare those traits to their “Perceived Need to Adjust” profile which is a High C and S – note they are the same behaviours just switched around.

What this profile is telling us is that the person has the perceived need to adjust who they are naturally to meet the demands of the environment or role they are currently in at work.

Their natural S drops yet their C increases. (Note, we look at the numbers on the bottom of the graph not the positioning of the graph). This would tend to indicate that the environment or role they are in they feel the need to be a lot more organised, it is either a highly processed or systematic role, they want to be in control, they are dealing with a lot of facts, data or important information and have a desire to deliver only perfect results.

Given they already posses a High C in their Natural Style, it would not take too much additional effort for that person to be engaged in that type or quality of work, however they need to be aware that if they are put under too much pressure as a C, there are certain behavioural traits of their higher Natural default style S that could appear ie: without clear deadlines they could become slow. If they don’t have enough information, will not be comfortable to make a decision – analysis paralysis etc.

If, for example the “Perceived Need to Adjust” profile in this instance was in fact a High I instead of a High C, this would be a much more significant shift from their Natural Style and therefore take a lot more energy as being a High I and dealing with people being an enthusiastic people person, isn’t something that comes as naturally to them. It does not mean they are not capable of doing the role, they absolutely are, it just means it will take more energy and it will not be as sustainable long term and there is a greater risk of them burning out. Make sense?

I am a first hand example of this. In my previous life as first a Lawyer and then Head of HR for various companies – I know odd mix, but hey, for years, I had my Natural Style as High CI. I loved information, detail etc, hence the Lawyer and High C, but also I also loved being around people. My perceived need to adjust however was High I followed by a High C. Given I was Head of HR, I felt the need to be more “visible” and enthusiastic than what I actually sometimes wanted to be and that I probably needed to be which in turn lead me to burn out….twice.

Now, I am quite a comfortable mix of DCS, which if anyone would have ever told me I would have had an S or D in me, I wouldn’t have believed them, but secretly I think I’ve been working towards slowing down but also being more confident in who I am. I turned 40 last year and well it’s safe to say am in a pretty good place. I no longer feel the need to have a position with a specific company to demonstrate my self worth, my priorities are about my family, making sure the kids feel safe, confident, loved, that I’m there for them yet being able to also have a sense of purpose which is passing on the gift of knowledge I have gathered throughout my career,  so it can help others short cut what can sometimes take years to figure out.

So, I’ll leave you with one question, if you’re not happy in your role at work, not sure you’re In the right role, feeling lost or not loving what you’re doing, constantly feeling exhausted, it’s definitely not the only reason to do a DISC profile, but it would be highly beneficial to be able to uncover what’s going on inside that brain of yours.

I could continue to share hundreds of stories of light bulb ah ha moments so many people have after completing profiles, but this blog would end up being way too long, so I will work on getting some of the most fun ones together and share them separately. Till then.

The History of DISC

For those of you keen to understand the background of DISC, I thought I’d put together a little a snapshot of how this impressive tool came to life and is able to add such great value to our lives today.

DISC dates back to the early 1920’s when Psychologist William Moulton Marston graduated from doctoral studies at Harvard in the newly developing field of psychology. In 1928, he released the findings of his studies and published a book called Emotions of Normal People, which showcased his extensive research and theory behind the DISC model.

What he discovered was that we have both behavioural styles that are natural, internal, and innate, but alsoa style that is able to be largely impacted by a particular environment we may be in at the time (related to our work).

For the most part, we all have the four styles in us in varying degrees of intensity represented as by the graph. 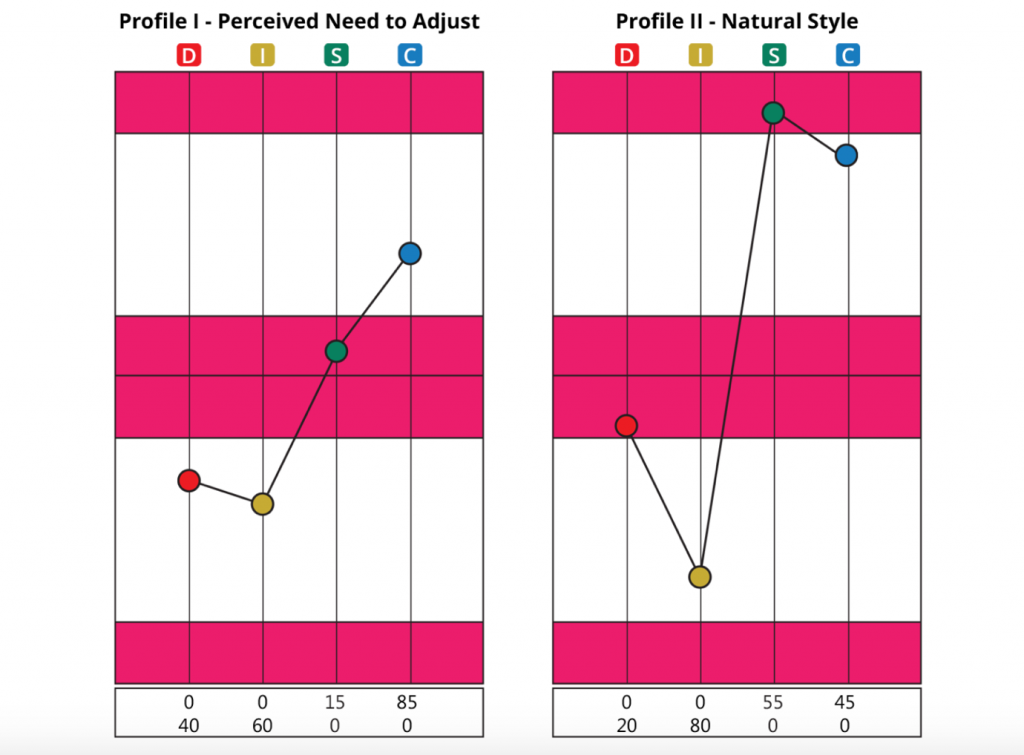 We have what is called our “Natural Style” ie: what comes most naturally to us, who we are at our default and we also have what is known as our “Perceived Need to Adjust” – which is based on the circumstances on any environment we are in at any given time. They may be the same, they may be different. There is no profile that is right or wrong, better or worse than another. All it is, is information about ourselves.

DISC has become and is now known as the universal language of behavior because of it’s simplicity and sincerity.  The language is so easy to understood and apply.

Every day, I never cease to be amazed the insight it brings to individuals, teams and organisations.

I tell what is also super interesting, the lie detector machine was also the brainchild of  Dr. William Moulton Marston and he also developed the female superhero archetype Wonder Woman, but hands down his most enduring contribution to truth-seeking is the way he enables the theory of DISC to reveal behavioral truths that can have profound effects on every-day people.

It’s hands down my most favourite behavioural tool to use. I’ve even gone so far as to not take on any new clients anymore until they have completed a DISC profile. The benefits are truly beyond insightful.

If you’re interested in having your DISC Profile done, reach out. You absolutely will not regret it.